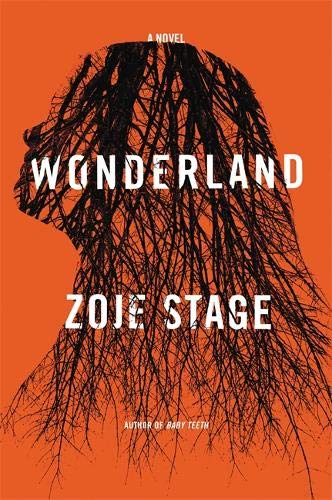 If the past year has taught me anything? I can’t be afraid of switching things up. Expanding my horizons. Being unafraid to be bold in my decision-making.

Holistically speaking, most of the books that I’ve chosen to review for Pipeline are works that are more or less in my wheelhouse, genre-wise. Meaning, I knew going into the read that it was pretty likely that I was going to enjoy them—or at the very least appreciate them. So, in that sense, I’ve been “playing it safe.” To use a gambling analogyI’ve been betting with the house money instead of my own.

With this review, I decided to remedy that. I picked a book that, honestly, I probably wouldn’t have been inclined to buy for myself in any other circumstance: a psychological horror with a supernatural twist—Wonderland by Zoje Stage.

I should preface all of this by saying: usually, I can’t stand supernatural horror. 99.9% of the time I think it’s hokey, lazy storytelling that relies on the most hackneyed, cliché plot devices and writing gambits to ever exist, and ultimately falls short of the mark in pretty much every intended aspect. Getting me to watch a film/TV series or read a book in this genre is about as commonplace as seeing a deer in Los Angeles. But I went and did it anyway—I was committed to my mission, dang it.

By all accounts, Zoje Stage is considered to be a master of slow-burn, character-driven psychological horror. Her debut novel, Baby Teeth, was considered one of the best releases of 2018, and the film rights were optioned by Village Roadshow and Valparaiso Pictures. And before she became a novelist, she was a celebrated indie playwright and filmmaker. Thus, Wonderland, published by Mulholland Books (Hachette) in July 2020, was a highly, highly anticipated title. So, I prepared myself to sink my teeth into the read.

Honestly? To begin with, I was a little underwhelmed. While the prose was undoubtedly solid and the characters crisply developed and fully dimensional, the narrative’s overall setup seemed like the most unoriginal thing possible: a family moves away from New York City to start life anew in a remote cabin upstate, and chaos ensues when a spirit on the property starts to haunt them. Yawn. I felt my eyes start to glaze over as I sketched out the expected rest of the story in my head.

And that’s when the train of weird really started chugging and tooting its horn.

Staying true to the slow-burn roots of Baby Teeth, the terrifically strange and unsettling tension of Wonderland seeps into the pages gradually, in little yet incredibly consequential drips and drabs. As the characters start to question their sanity and the nature of their reality, Stage makes you do the same as a reader. There were countless moments where I found myself flipping back to passages several times over to ensure that I wasn’t mistaken about the bonkers reveal I had just read. And there are sections of the novel that are just breathtakingly written—highly literary prose that terrifies just as much as it intellectually stimulates. By page 100, I realized that I was in the hands of a meticulous auteur—a creative who had complete and utter command of her craft. She was painting me a masterpiece where I wouldn’t be able to truly tell what the hell was going on until the very end when she whipped off the canvas for all to behold.

And once I realized that the “spirit” that was terrorizing the family was not even close to what I had predicted it was going to be?  See ya later—I pushed all of my chips into the pot. I was all in.

See what I did there? I brought the gambling analogy back full circle. Not just a hat rack, my friend.

That’s not to say that there’s anything “easy” about this novel. It requires a high degree of patience, a willingness to be uncomfortable for long stretches of time, and a healthy dose of suspension of disbelief. There are times where it feels like it would be better suited for a more visual medium like film instead of a book. If you’re reading this, Jason Blum? Get on it and option this damn thing. It will fit the Blumhouse brand better than a toga on a Roman patrician.

In this sense, Wonderland reminds me a lot of Yorgos Lanthimos’ The Killing of a Sacred Deer, Tom Ford’s Nocturnal Animals, and Ari Aster’s Midsommar. By nature of their highly stylized content, their archly dark, pitch-black themes, and extremely methodical execution, they are 100% not going to be everyone’s cup of tea. Wonderland is in the same boat. Which undoubtedly explains the somewhat mixed reception that it’s gotten. Like the three aforementioned film titles, Wonderland is a piece that someone is either going to love or hate—with no middle ground. It’s also nearly impossible to discuss the novel’s plot without giving away spoilers, which probably frustrated a great deal of finicky, keyboard-slapping critics.

When it’s all said and done, though? I’m thoroughly glad I decided to branch out and select a book like Wonderland to review. Through this novel, Stage has expanded my palate to include a genre flavor that I never previously thought possible. This isn’t to say that I’m going to consume nothing but supernatural horror from now on. Far from it. But it’s nice to know that I have some variety in my literary diet now. After all, no one can eat meat and potatoes for their entire life—sometimes you’ve got to eat some delectably-prepared spinach.