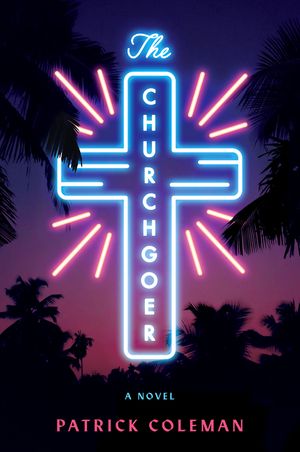 Slow-burn, atmospheric, literary noir—a subgenre of crime fiction that’s rich with history in the publishing world. Some of the finest writers to ever dip their quills into ink—Raymond Chandler, James Ellroy, and Patricia Highsmith, for example—were masters of literary noir, preeminent in pushing the subgenre to the forefront of the book industry. A prospective work of the genre must not only adhere to the classic plot structure of crime drama, but also serve as a deep psychological probe into the minds of its morally ambiguous, oftentimes self-destructive characters. Said work also can’t skimp on ambience. In order to be considered literary noir, the backdrop and tone of the story should be vivid, dripping in subtext and intrigue at every turn, and serve as practically its own character. It is a high bar, and is one that many try, and fail, to clear.

Which is why, I’m so glad to say, that The Churchgoer not only gets over that bar, but exceeds it in leaps and bounds.

The Churchgoer is the debut novel from Patrick Coleman, a powerfully affecting piece that lingers long after you finish the last page. It follows Mark Haines, a former evangelical pastor turned burnout surfing bum living in a self-imposed exile in Southern California. When he’s not surfing, he works the graveyard shift as a security guard at an industrial complex. This life of isolation is uprooted when Cindy, a young, hitchhiking drifter he befriended, mysteriously goes missing on the same night that his co-worker is brutally murdered in a robbery gone awry. Convinced that the two happenings are linked, Mark is led down an increasingly strange, eerie path—one that involves a highly dangerous drug running operation and an evangelical megachurch. This not only forces Mark to confront the unresolved demons from his past, but also puts him smack dab in the middle of a highly dangerous investigation, where the stakes could literally not be any higher.

Released last summer (July 2019), The Churchgoer was met with critical acclaim upon its release. In January 2020, it was announced that Nic Pizzolatto and Matthew McConaughey would adapt The Churchgoer into a drama series at FX, entitled Redeemer, reuniting the duo for the first time since they collaborated on the first season of HBO’s True Detective. Pizzolatto will write/EP the series, and McConaughey will star/EP.

A pretty killer end result for a first-time novelist, indeed.

So, what’s the takeaway here? How did The Churchgoer navigate an incredibly congested marketplace in order to become a breakout hit and attract two of the hottest film/TV talents currently working?

It possesses an unmistakable, wholly distinctive, and utterly intoxicating tone.

While the plot of The Churchgoer does everything it needs to—it’s engrossing, moves at a clip, and wields a multifaceted, well-thought-out central mystery—the action is not the novel’s real standout. It’s the intangible feel of the piece—its moody, stylized atmosphere, its haunting psychological thematic probing of faith, regret, masculinity, and morality, and its evocative, melancholic prose—that makes The Churchgoer a blue chip recruit. Moreover, the novel is a work that would never, ever be mistaken for anything that it’s not. It’s not going to be everyone’s cup of tea, but The Churchgoer is completely unique, a beacon example of how to write for a specific, niche audience.

While it should be noted that Pizzolatto and McConaughey will likely continue to change things in their adaptation (according to the press release, in addition to changing the title, they’ve already moved the setting from California to Texas, for instance), it’s instantly recognizable how the content of The Churchgoer will fit them like a glove. You can practically hear McConaughey’s drawl in your head as you read the prose, and Pizzolatto’s love of exploring similar thematic content is well-documented. Just look at all three seasons of True Detective.

All in all, The Churchgoer is an incredible feat, and one that will likely stand the test of time as a classic in the genre. I, for one, cannot wait for it to be immortalized on the small screen, and am waiting with bated breath for the author’s next release.