By Peter Malone ElliottMay 13, 2021No Comments 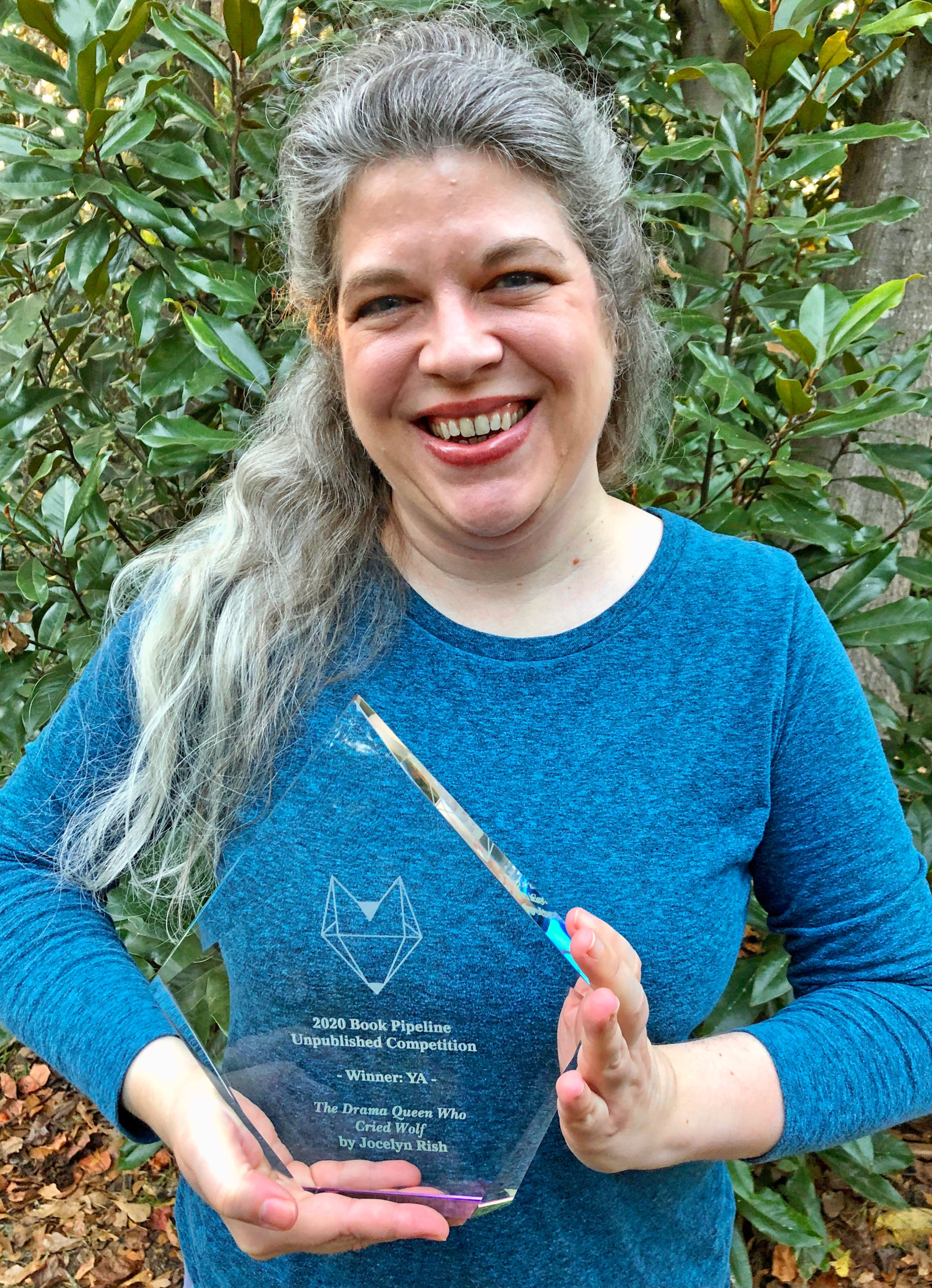 Jocelyn Rish was the Grand Prize Winner of the YA category in the 2020 Book Pipeline Unpublished season with her novel, The Drama Queen Who Cried Wolf.

Something that stuck out to us immediately upon reading The Drama Queen Who Cried Wolf was its unmistakable voice. It’s funny, charming, and never once outstays its welcome, while also not forgetting to keep the story moving forward—a must in a murder mystery. A comparison that instantly came to mind was Veronica Mars. How did you find balancing such voice-driven prose in a typically “plot-driven” genre like murder-mystery, and when were you confident that you had nailed it?

Ha – are writers ever confident they’ve nailed something? But your description of the voice is definitely a boost in that confidence, since being compared to Veronica Mars is awesome!

I’ve been working on Drama Queen on and off since I wrote the rough draft for National Novel Writing Month waaaay back in 2007. The voice came naturally during that frenzied month of writing, so I honestly didn’t put much thought into it—I just let it flow. But when I revised, since I kept hearing about the importance of voice, I dialed it up to about twenty.

Then I submitted the first chapter for a critique at a SCBWI conference. I found out I was assigned to the keynote speaker, and her speech actually focused on voice. While she talked, I was so excited, and even a bit smug, because I just knew she was going to loooove my voice-y submission.

Then it was time for the critique. She, in fact, did not love my chapter. She actually thought it was obnoxious. She said it was like an old-time radio show where the narrator is like, “look, see how funny I am, see, see!”

She was very kind (and helpful!), but it was still crushing. I couldn’t look at the manuscript for a long time. But when I finally returned to it, I saw how right she was—the voice was waaaay over the top. So I stripped it back to what it was originally. Turns out, just letting words flow without overthinking during the rush of NaNo was the way for me to tap into a true voice.

Drama Queen has been through many, many, MANY revisions since then, but throughout them all, I tried to remain true to the voice that initially poured out of me.

Brea is such a delightful protagonist—an eccentric, crime-junkie teenager with a wonderfully dry wit. We hate the term “laugh out loud,” but several lines of her dialogue made that turn-of-phrase come true! Probably the best aspect of her character, though, is how you put a fresh spin on the “lovable misfit” trope common to YA fiction. How did you go about determining Brea’s idiosyncrasies in personality—the mannerisms that imbue her with such specificity?

So, uh, I’m not sure if I should confess this since it’s kind of embarrassing but … Brea is basically me. Like Brea, I love horror and mysteries and watch/read probably too many of them. Like Brea, I have an overactive imagination and lots of anxiety. So, every creak in the house is a serial killer. Every rustle in the bushes is a murderous monster. And because I’m logical enough to realize how ridiculous my brain’s leaps are, I often cover it with humor. “Oh, I just heard a bump in the attic—clearly Jason Voorhees is here to kill me. Ch ch ch, ah ah ah. Ha ha ha!”

But Brea is much braver than I am. And definitely more lovable. I had to make a character who would be fun to follow over the course of a novel, and that is surely not me! So, although a lot of my quirks are in Brea’s DNA, I tried to create a character who readers would root for even when she was being ridiculous.

You have a picture book coming out this fall (Battle of the Butts, Running Press Kids). First of all, congratulations! We’re curious to know, how was balancing writing a picture book about butts in the animal kingdom (which is still one of the greatest pitches we’ve ever heard, by the way) with a YA novel like Drama Queen? There’s a common thread of quirkiness through both pieces, obviously, but we’d have to imagine the processes of development were very different. Did one ever influence the other?

Oh my goodness, I think you just identified my brand! I’ve been wondering how to gather my fiction and nonfiction under one umbrella, and “a common thread of quirkiness” seems like the perfect fit. Gonna steal that for my website!

I admire and am extremely jealous of writers who can work on more than one project at a time. I just can’t do it. Fortunately, I didn’t have any novels in progress when I got the idea for Battle of the Butts. But I’d never written nonfiction before, so I had no idea what I was doing.

Luckily, right after I got the idea, I heard about a workshop being offered at the Highlights Foundation called the Nuts & Bolts of Science Writing. I was able to attend, and it was extremely helpful for learning how to research and then organize and consolidate the info.

You can learn more about Battle of the Butts (and pre-order it!).

Out of our six winners, you are the only one who already had representation (Tracy Marchini of BookEnds Literary). We’ve had the opportunity to speak to Tracy, and she’s absolutely lovely. For our readers who are unrepresented authors themselves, can you shed a little light on your working relationship with Tracy? When shaping the manuscript of Drama Queen, what fresh perspectives did she bring that ended up altering what you thought the story was or had the potential to be?

Tracy is lovely! She signed me when I queried Battle of the Butts. For now, we’ve been focused on establishing me as a nonfiction picture book writer rather than dipping into my backlog of YA and MG novels.

I’ve discovered that while an agent’s primary job is to sell books, their most important job is to keep their clients writing when we try to talk ourselves out of it. I’ll send a new idea saying, this is probably stupid. Tracy: Actually, kids will love it, and here’s a way to frame it to make it stronger—now write it! I’ll send a sample chapter with the qualifier, OMG, this is the most boring thing that ever boring-ed. Tracy: No, this is actually extremely interesting, now go write more!

Agents are there as a sounding board and a support system. They have a keen eye for what’s selling, and they can help you reframe ideas into something more likely to catch a publisher’s interest.

To wrap things up here, what are you currently watching/reading/listening to at the moment? Anything that is creatively inspiring you while working on your next project?

My current WIP is another nonfiction picture book about unusual animal traits. So, the stuff I’m reading and watching is more about fun brain breaks rather than inspiring my writing.

I just binge-watched Sweet Home on Netflix the other night. Since I love horror and am a fan of Korean Dramas, it was a perfect blend of the two for me. Really, really hoping there’s a season two!

And I’m reading Five Dark Fates, the fourth and final book in the Three Dark Crowns series by Kendare Blake. I can’t imagine writing a fantasy because I’m not skilled at world building, but I love reading them as an exciting escape.

It’s actually funny timing that I’m reading Kendare’s book right as I’m doing an interview about Drama Queen because years ago I won a critique from her, and she read the first chapter of DQ. Not only did she have helpful feedback, but she was extremely encouraging, which was a much-needed boost while on the tough journey to publication.

So many writers have given me advice, feedback, and support over the years on various projects, which have kept me going when it would have been so much easier to quit. That’s my big piece of advice—find a strong writing community. You need people who understand what you’re going through. Help each other with feedback. Lift each other up. Then celebrate the wins!

Jocelyn Rish is a writer and filmmaker who loves exploring the magic of stories in all their formats. Her short stories have been published in Highlights for Children and The Post & Courier, and she previously wrote for the MTV News website. Her debut Battle of the Butts will be published in the fall of 2021 by Running Press Kids.

Peter is a writer hailing from the great commonwealth of Virginia. Wired Shut, his first feature film credit as writer-producer, is out now on Digital, VOD, and DVD. It is currently nominated for "Best Screenwriting Motion Picture" at the 2022 Leo Awards. Peter is currently based in Brooklyn, where he divides his time between developing a slate of new projects (including his debut novel), walking his lovably cranky dog, Panda, and exploring everything that the greatest city in the U.S. has to offer. He is also the Director of Operations at Book Pipeline and the proud co-host of the Pipeline Artists Original Podcast, This Podcast Needs a Title.