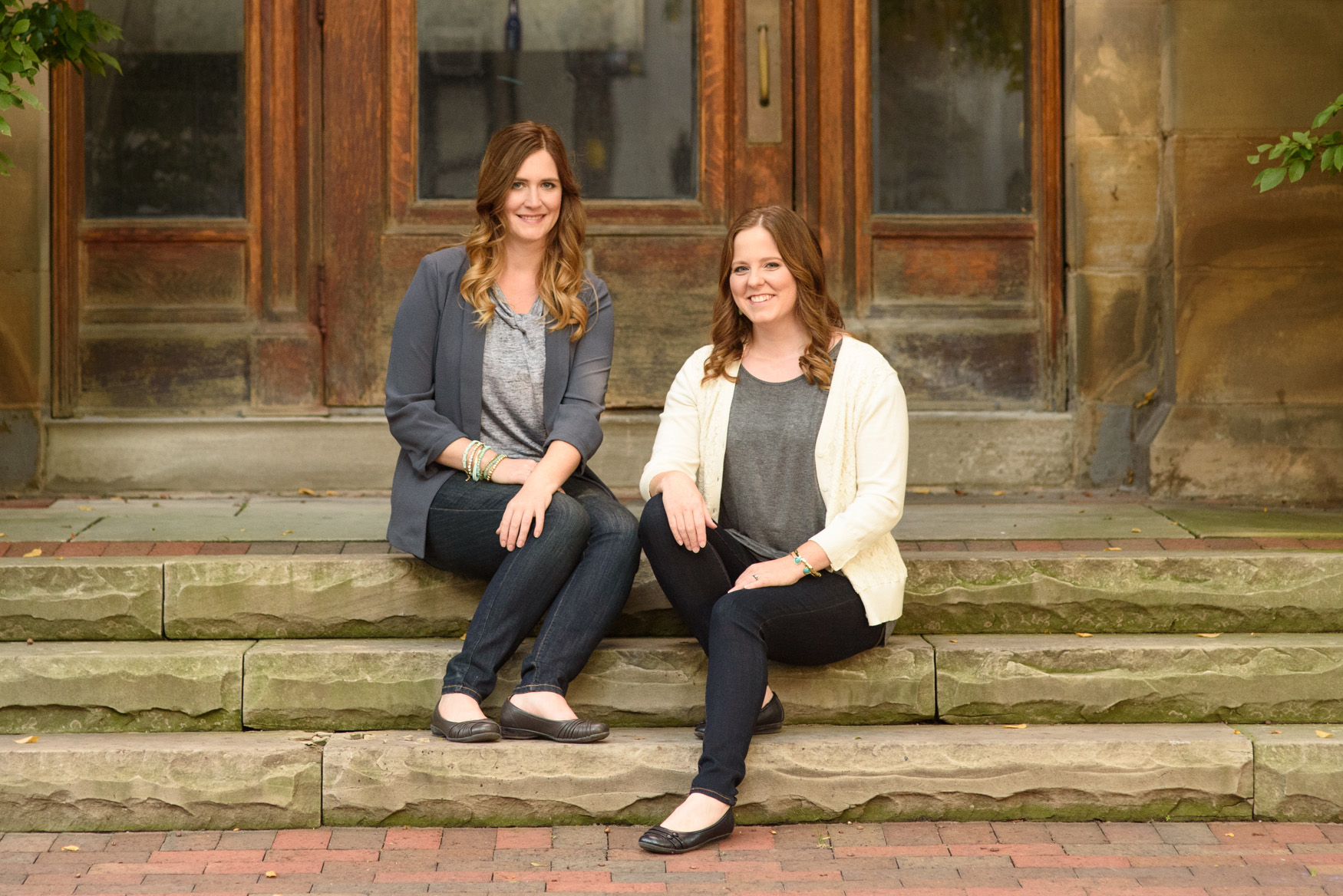 Jessi Honard and Marie Parks placed as finalists in the Sci-Fi/Fantasy category of the 2020 Book Pipeline Unpublished season with their novel Unrelenting. After an introduction from Book Pipeline, Jessi and Marie signed a publishing deal with Not a Pipe Publishing, who will release the book in 2022.

Something that really appealed to us about Unrelenting was how it effortlessly blended supernatural fantasy and thriller into one cohesive, wholly accessible piece—one that expertly subverted the story and character tropes of those genres, yet took full advantage of the structural commonalities that readers love about them. Was there a conscious choice on your part to straddle the fence from the initial stages of development? Or did it happen more organically as you began diving into the manuscript itself?

Marie Parks (MP): Organic, for sure! There are nine (nine!) drafts in our Google Drive, and the early versions bear very little resemblance to the final manuscript. We started off with character concepts, hints of underlying magic, and a mood—rainy, dreary, and Cleveland-y. From there, we devised the plot about a missing sister, a wide-ranging cover-up, and a magical underworld.

Jessi Honard (JH): The initial seeds of the story revolved almost entirely around figuring out how our main character, Bridget, would react if thrown into this gritty, magical world. We were even missing some of the most essential characters in the first few versions!

MP: It wasn’t until we’d written a few drafts that we realized it was a genre-bending story. Sometimes you just have to stumble upon these things! Once we figured this out, we were able to leverage those beats, lean into our characters’ arcs, and delve deeper into the magic.

While co-writers are very common in film/TV, it doesn’t seem to be quite as frequent in the publishing world. What do you find most creatively fulfilling about co-authoring a novel, and how do you navigate the potentially tricky landscape of not only being one another’s collaborator, but also each other’s friend and business partner?

JH: Marie and I often joke that we share a brain. It’s so fulfilling to work alongside someone who intuitively understands my intentions, knows when to push back, and can help fill in the gaps of knowledge and experience (and I hope I do the same for her!).

JH: On top of that, we’ve collaborated in some form or fashion since 2010, both in writing fiction and co-running a business. We’ve learned to trust one another implicitly. As for the challenges, we operate by a strict “friends first” policy. That means always prioritizing our relationship over our projects. It requires leaving our ego at the door and approaching disagreements with a problem-solving mindset.

The supernatural world-building of Unrelenting is rich, wonderfully heightened, and just absolutely oozes with series potential. But it never goes off the rails into being too much. It’s remarkably grounded, with one foot firmly in reality. How much time did you spend nailing down the “rules” of the novel’s otherworldliness, and what made you settle on the Grigori—immortal magic-wielders who inhabit the bodies of the dead?

JH: First, thank you for the compliments! We love the Grigori, and we’ve spent a lot of time thinking about their world. In fact, the Grigori characters were some of the first we fleshed out. I think it feels grounded because our main character, Bridget, is grounded. She’s a determined, focused person faced with a completely new world. And Bridget, being who she is, doesn’t allow herself the time to get caught up in the newness of it. Her natural method of coping is to focus on her mission and find her sister.

We established some of the basic rules of the world right from the beginning. We always knew the Grigori were immortal and that they had certain (but limited) magical abilities. But the finer points we hammered out in the process of writing.

MP: To be honest, we didn’t finalize some world-building concepts until we finished the manuscript! A conversation late in the game helped us hammer out the way the Grigori symbols work. Ah, the joys of being a pair of “pantsers”—writers who develop their story by the seat of their pants, as opposed to planning everything out ahead of time.

While we find the axiom “write what you know” to be limiting, it’s an unavoidable truth that creatives will infuse some of themselves into whatever they work on—even if only just a little or indirectly. With that in mind, was there anything thematically that you wanted to explore in Unrelenting that derived from personal experiences?

MP: Jessi grew up outside of Cleveland, and when we decided to set the novel there, we both hopped on a plane to meet up in The CLE so I could get a taste of the environment. We checked out the usual attractions, like Lake Erie and Playhouse Square, but we also poked around in back alleys and shadowy corners—not the average tourist experience!

JH: In terms of broader themes, Marie and I are both interested in concepts of trust and identity, which we’ve both tangled with in our lives. We also like to explore the power of the non-romantic relationships that are part of all of our lives. Even though neither of us have a sister, people often mistake us for sisters. So we leaned into Bridget’s strong ties to her sibling. Plus, we wanted to give ample attention to her budding friendship with James, as well as how she relates to each of the Grigori.

At Pipeline, we do our best to try and demystify the “business” side of the industry for our readers and entrants whenever we can. With that in mind, what was the thing that surprised you most about shopping your manuscript around to prospective agents and publishing houses? What advice would you give to an author who has never been through that gauntlet before?

MP: We’d been querying for years before we learned we were finalists for the Book Pipeline Unpublished contest, so we were used to research, rejections, and moving on to the next promising prospect. But it was amazing to see the difference having relationships and advocates really made. It’s like the floodgates opened—suddenly, we had a call with an agent, as well as three independent traditional publishers who wanted to speak with us. It was really exciting. Still is!

I advise other authors to recognize just how massively busy and overwhelmed agents and publishers are, and to not take rejection personally. There are any number of reasons your manuscript might not be a good fit for them, and it’s not necessarily a reflection on you or the quality of your work. Often, it’s due to factors entirely outside your control! So, keep writing, keep learning, and do what you can to forge genuine relationships with those in the industry. This will not only give you greater insight into how everything works, but also potentially open the door to exciting opportunities.

JH: Absolutely. I think the biggest lesson I’ve learned throughout this process is to detach from the outcome. I love Unrelenting. I love the characters and the world and the story, and I’m so glad it’s found a home. But, during the process of querying, that result wasn’t inevitable. It’s a long haul, and it was important for me to take time to work on other writing projects. I wrote a few short stories and focused on a new novel, all while actively querying. I never wanted to feel like Unrelenting was my only shot. There are more stories to be told.

Last but not least: a hearty Pipeline congratulations to you two for signing a publishing deal for Unrelenting with Not a Pipe Publishing! Obviously, we are a bit biased (as Not a Pipe is one of our many beloved industry contacts), but what was it specifically about their team that convinced you they were the best home for Unrelenting?

JH: Thank you so much! We’re thrilled to join the Not a Pipe family, and we felt confident they were the right home for Unrelenting from our first conversation. Not only is our genre within their wheelhouse, but they have a talented and passionate staff who really care about us and our book. When we spoke with their authors, all of them were gushing with praise for Not a Pipe, and when we picked up several of their books, we really enjoyed them—and were impressed with their quality. Plus, we deeply appreciate the fact that we share the same values as Not a Pipe, and they view their work with authors as a true partnership.

Surviving almost exclusively on caffeine and camping trips, Jessi Honard has been writing stories as long as she can remember. As a queer fantasy and science fiction author, her works regularly explore themes of identity, belonging, and trust. Her debut novel, Unrelenting, co-written with Marie Parks, will be published in 2022 by Not a Pipe Publishing. She and Marie were finalists in the 2020 Book Pipeline Unpublished Contest.

Jessi currently lives in the California Bay Area with her partner, where she goes hiking and rock climbing every chance she gets.

Marie Parks is a fantasy author who lives with her dogs in Albuquerque, New Mexico, after traveling full-time in an RV for years. Her debut novel, Unrelenting, co-written with Jessi Honard, will be published in 2022 by Not a Pipe Publishing. She and Jessi were finalists in the 2020 Book Pipeline Unpublished Contest, and she is a nominee for the 2021 Futurescapes Award for her current work in progress—a fantasy heist that explores the impact of classism.

Her writing dives into topics like social justice, the environment, and the power of friendship. As the co-owner of North Star Messaging +Strategy, a content marketing agency formed in 2010, she’s passionate about helping freelance writers succeed financially.

When she isn’t writing, Marie is hiking, camping, and chowing down on New Mexico green chile.