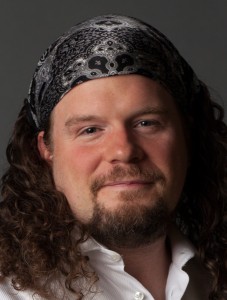 Milo Behr grew up in New York, Central America, Europe and the Middle East. His short fiction has appeared in anthologies alongside David Farland, Kevin J. Anderson, Eugie Foster, and others. Academically, he’s published through IEEE, ICSTC and others, and spoken at SIGGRAPH, BIA/Kelsey’s ILM, VFX and elsewhere. Milo has taught, and guest-lectures on, film production and information technology on the university level, and has twice been commended by the US Army for outstanding research.

He invented DigiClay Animation (his animation shop was the first to computer-animate Gumby), Cryptocast streaming media encryption, and a variety of other technologies. He lives among the Rocky Mountains with his wife and three children.

A sequel to his Book Pipeline winning novel will be released in 2019. Read Beowulf: A Bloody Calculus.

From Book Pipeline: “Such a rich, immersive experience. The story digs in its feet from the first chapter and pushes the reader through a futuristic backdrop devoid of the tropes we see far too often. Milo has imagined a remarkably vivid neo-noir type world built upon a grounded sense of the future without sacrificing the expectations of the genre. Intentional or not, what’s most impressive is the malleability of the story: as a film, as a mini-series, or potentially a multiple-season TV show, given the episodic potential of the premise. Definitely an emerging sci-fi writing talent worth keeping an eye on.”