Beautiful World, Where Are You

By Peter Malone ElliottNovember 10, 2021No Comments 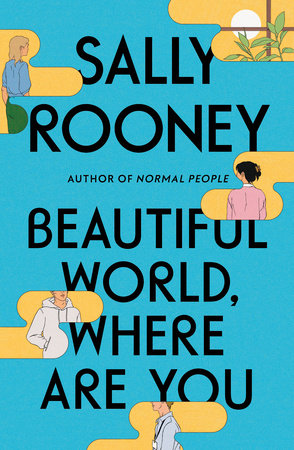 Beautiful World, Where Are You
by Sally Rooney
lit fiction
Farrar, Straus and Giroux—September 2021

Doing what I do for a living, I’m constantly speaking with fellow industry and creative folks about what we’ve been watching or reading. To be frank? It’s probably about 75% of the conversations I have. Don’t get me wrong—I absolutely love talking about the works of art that I find engaging and interesting. Those tête-à-têtes are always lively, incredibly stimulating, and thoroughly enjoyable.

Inevitably, though, in the past two to three years, there’s been something that, without fail, manages to wheedle its way into these discussions—and has become something that I utterly dread.

“Did you watch Normal People?”

Then I reply that not only have I not seen Normal People, I have not read any of Sally Rooney’s books.

Then the conversation grinds to a halt and people look at me as if I have six heads.

Or, I get lambasted for not having seen or read anything from “one of the most important authors of the past decade.”

I’ll admit it—I’m a natural skeptic with a streak of stubbornness so distinct that I’m looking into trademarking it (don’t fact check that). So, when people I know tell me that I have to watch or read something, or when a film, TV show, or book has every single critic seemingly doing nothing but heaping praise upon it? My defiance kicks in.

There’s no way someone’s work can be that amazing, right?

The 6,137 people (yes, that’s definitely a very scientifically found number) I’ve encountered who have raved ad nauseum about her writing all must be high on each other’s supply, right?

Or even worse—they haven’t actually read or seen any of her stuff and are just agreeing with others to sound hip and in the know, right?

Hip. In the Know. Those are phrases that a 27-year-old should be saying, right?

So, with the release of Rooney’s new novel, Beautiful World, Where Are You, I decided to finally give in, take the plunge, and see what all the fuss was about.

And … if I could eat humble pie? I would. But I can’t seem to find a bakery in Brooklyn that makes it.

So, I guess I’ll just have to fall back on calling dibs on being person number #6,138.

Beautiful World breaks just about every single rule in the supposed writing playbook. The format is incredibly wonky. She doesn’t put dialogue in quotes, and her paragraphs are long—oftentimes one would fill up nearly an entire page. Each of the four characters are highly flawed and, at times, incredibly unsympathetic. It occasionally feels a bit more like a play than a novel. But probably most unorthodox of all? There isn’t a discernible plot anywhere in sight—at least not in the standard sense of the word.

And yet? It is heartachingly brilliant. An undeniably distinctive literary gem in a sea of sameness.

Beautiful World follows the day-to-day lives of four characters—Alice, a famous novelist; Felix, a warehouse worker; Eileen; a literary magazine employee; and Simon; a behind-the-scenes worker-bee of UK politics—and the ups-and-downs, trials and tribulations, and ultimate intertwining of their romantic lives with one another.

There’s no “twist” or “elevated, high-concept element.” There’s nothing but rich, honest character work, and elegant, well-executed, and unadulterated emotion. Turns out? That’s all you need to grip a reader.

Through the poignancy of laying her characters absolutely bare on the page and not trying to excuse or explain away their bad behavior, Rooney shines an altogether realistic light on the deepest, rawest crevice of the human condition: the desire to be loved, and the lengths we will go to achieve it. It is the ultimate truth—one of the few aspects of humankind that is truly universal—and is undoubtedly why the book is resonating with so many people.

To this end, when I work with Book Pipeline authors, I oftentimes find myself echoing a similar refrain in my notes on their material—less is more. Taking a more subtle, nuanced approach to plot, theme, and character will always make those elements pop more. The most common misconception across both the film/TV and publishing industries is that audiences/readers are not intuitive—that they will need to be spoon-fed or whacked over the head in order to truly “get” what they are consuming. Nothing could be further from the truth. And Beautiful World is exhibit A in proving that thesis statement.

All in all, while I wouldn’t necessarily recommend that writers working on their first novel employ her unusual style of structuring and formatting, I will certainly be pointing them towards Beautiful World as the North Star of the everlasting complexity of simplicity.

And yes, everyone—I will watch and read Normal People, now. I swear.