By Peter Malone ElliottJanuary 27, 2022No Comments 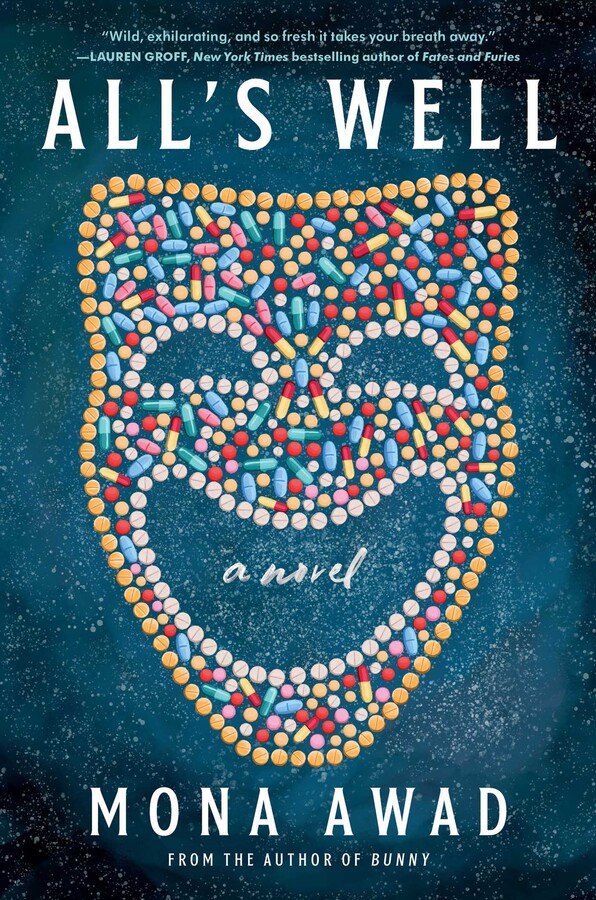 Have you ever wondered what you would get if you crossed the bizarre, eerie surrealism of David Lynch with a biting, deliciously dark, female-driven absurdist satire?

To be honest? Me neither.

Because that’s exactly what I got with All’s Well by Mona Awad.

I can assure you, without any exaggeration, that this is truly the most bonkers, challenging, yet highly rewarding book I’ve had the pleasure of reviewing for Pipeline. The only way I can accurately describe this piece is to categorize the overall effect that it had on me—reading it was like clinging on to the side of a bullet train careening through the Alps. It was whiplash-inducing, exhilarating, and completely upended my belief on what a novel could be.

So strap the fuck in.

All’s Well follows college theater director Miranda Fitch, a former star thespian whose life took an unexpected detour when she suffered a major injury after falling off stage during a production of, you guessed it, All’s Well That Ends Well. And now? Miranda is … well, a bit of a mess. She’s addicted to painkillers due to her never-ending back pain (which none of her colleagues believe is real), freshly divorced, and forced to deal with a largely talentless group of students on a daily basis. Even worse—there’s the looming threat of losing her job. The students want to put on a production of the Scottish play (that’s Macbeth for you non-theater folk), but Miranda is determined to stage All’s Well That Ends Well—the piece that caused the very injury that brought her here in the first place. And the students are not having it. As whispers of a rebellion begin to rise, an at-her-wits-end Miranda meets three strange men at her local bar—mysterious benefactors who offer Miranda a deal that promises to fix everything. But when Miranda takes their offer, and things start going horribly awry for those around her? Miranda begins to slowly lose her grip on reality and is forced to decide what (and who) in her life really matters.

It’s hard to fully articulate the tonal knife’s edge that Awad walks in this novel without giving away plot details. Suffice to say, All’s Well is an incredibly bold, stunningly brave piece of writing that examines themes of redemption, determining one’s self-worth, and, probably most prevalently, the underlying societal dismissal of female pain. Her searingly funny, wickedly arch prose is clearly designed to confront head on readers’ preconceived notions of gender stereotypes—more specifically, the reasons why physical and psychological traumas are treated much differently across the sexes. It’s heady sociological stuff asking deep, probing questions that don’t always have clear-cut answers. So, the fact that she’s able to execute this philosophical debate through the inherently silly yet acutely self-serious storytelling world of college theater and academia is frankly nothing short of miraculous—a tightrope walk of Herculean proportion. I would have LOVED to have been a fly-on-the-wall for the conversation between Awad and her agent when she was describing the essence of this project because … I just honestly don’t know how one would succinctly pitch this.

Unbelievably, the daredevilish nature of Awad’s prose is not even the most impressive part of the book. For that, we have to delve into the Lynchian aspects of the plot. Anyone who knows me recognizes my admiration for the one and only Mr. David Lynch. They’ve probably even heard me do my (spot-on, if I do say so myself) impression of the distinctive, whining timbre of his voice. The thing about Lynch’s stuff is that, even if a piece of his isn’t ultimately your cup of tea, his work has that undeniable X-factor—a baffling melting pot of genres, experimental tones, and non-sequitur storytelling devices that have no business working together. But, somehow, they do. Lynch’s work is utterly mesmerizing and something that I’ve never seen another creative be able to muster.

Until I read All’s Well.

Without divulging spoilers that would take away from the enjoyment of this novel—the last third of the book completely warps your perception of reality. More specifically, it is nearly impossible to tell whether or not what you’re reading is the imagined result of a nervous breakdown by Miranda or is actually happening. And that question is never truly answered—even at the book’s conclusion. In less capable hands, that uncertainty—especially in the climax of the narrative—could be infuriatingly frustrating. But in Awad’s? It’s positively spellbinding—a gargantuan, enthralling, and wholly unexplainable feat of genius that is only rivaled by a David Lynch original.

All said and done, though, by no means is this an “easy” read. Even as much as I enjoyed it, I couldn’t plow through it in long sittings as I normally do—I had to take it on in a bunch of sprint-like shorter segments with plenty of space in between. Honestly though, I think reading it that way is better suited for the material. This is a thought-provoking, complex piece that deserves to be digested and enjoyed—not consumed all at once. And it’s certainly not going to appeal to everyone. But for those who have the courage? I’d recommend slapping on a pair of gloves with the highest amount of grip possible and taking a deep breath—because you’re in for a ride like no other one you’ve taken before.