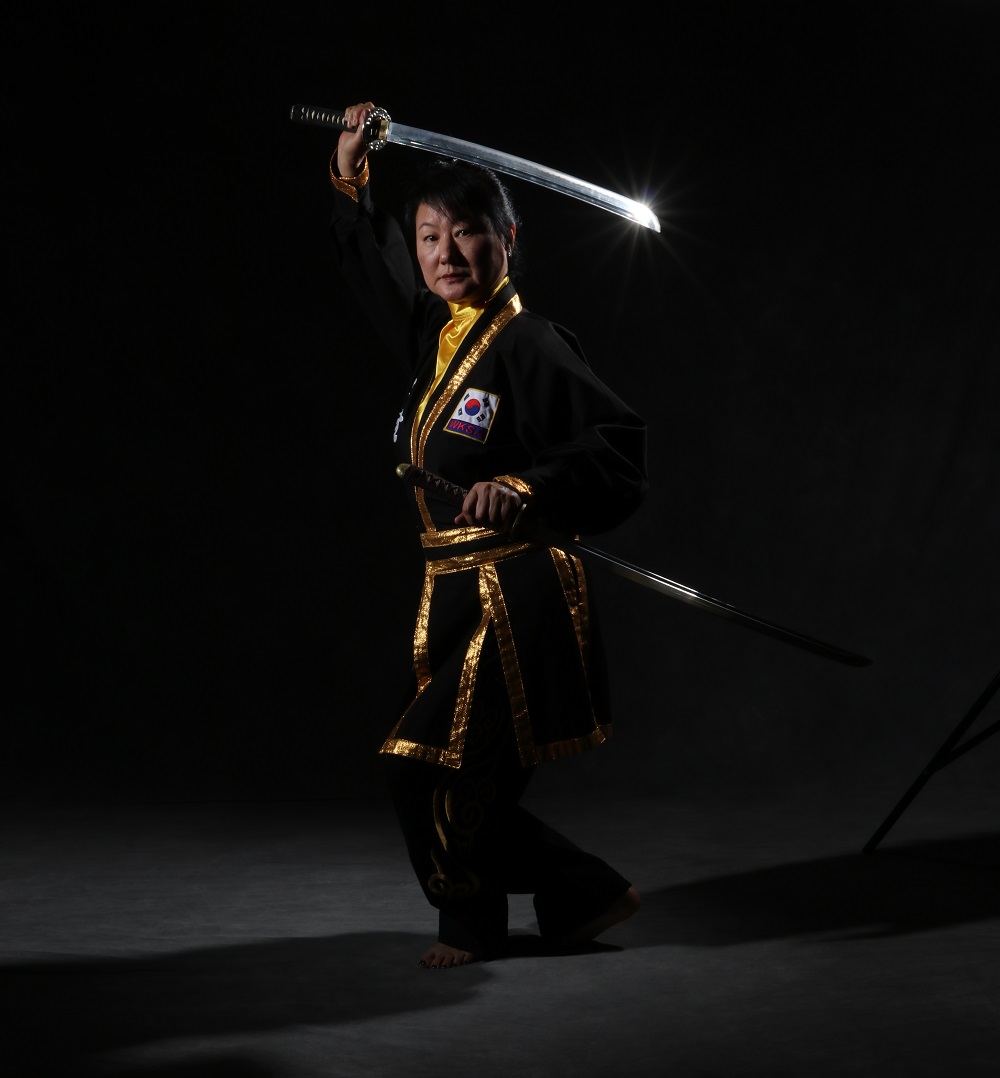 Finalists in the 2018 Book Pipeline season, Choon-Ok Harmon and Ana María Rodríguez teamed up for The Iron Butterfly: Memoir of a Martial Arts Master, detailing Choon-Ok’s rise to the highest-ranking woman in Kuk Sool Won, a traditionally male-dominated form of martial arts.

The Iron Butterfly is a fantastic memoir. Thoroughly motivating. How is it you two joined forces on the book? Ana, what were some of the pieces of Choon-Ok’s life that stood out most—the “clincher,” so to speak, that made you realize you have to write this?

COH: Ana María is a Black Belt in my martial arts school. My husband knew she was a writer, and we decided to ask her if she would be interested in writing my story. So, I told her a little about it and she decided that it was unique and needed to be told.

AMR: After Choon-Ok introduced me to her story, I felt compelled to write it. I was hooked by the strength of her character. How despite of all the major, sometimes life-threatening challenges life had repeatedly thrown at her, she persevered, never losing sight of her main goal of pursuing a better life.

I was also engaged by the deep-rooted relationship between Choon-Ok and her mother, Pak Ung-Ak. Theirs was both a nurturing and a clashing relationship that conflicted Choon-Ok, yet prodded her to pursue her goal. One major disagreement between them was what Choon-Ok should do with her life. Pak Ung-Ak insisted that Choon-Ok followed the path of a traditional Korean woman, but Choon-Ok, convinced that that path was not for her, rebelled against convention and chose to become a martial artist in a time and place where mostly men followed that career. This decision brought another set of major challenges to her life.

Choon-Ok’s story also appealed to me because a great deal of it happens in South Korea between the 1960s and 1980s—an intriguing, little-known time and place for many people of the western culture—and showed a female’s perspective on what it takes to balance a career in martial arts and family. After I added to that the action, intrigue, romance, and humor that surrounded Choon-Ok’s life, I thought that her story had many of the attributes that would likely engage a wide audience, both on paper and film.

Explain the working relationship between you both from early stages to final product. Were there parts of Choon-Ok’s story that weren’t included? If so, why?

COH: At first, I told her my memories and she recorded them. Ana María would transcribe them, and then I would go over them again. Often, I would remember something after reviewing the writing, and she then updated the transcript. Sometimes, while I was watching old Korean dramas, a memory would pop up in my mind. I would immediately call her, and she would write it down. Sometimes a smell or a sound or even a dream triggered in my memory something from my childhood. Again, I would call Ana María, and she would write it down. For about six years, we followed this strategy until the final product came out.

AMR: We decided that the first step would be to record Choon-Ok’s memories so I could later weave them into a story. We met once or twice a week in her home, and over tea I would listen, record, and also take handwritten notes of her memories. In the beginning I did not have a digital recorder, so I used my son’s red cassette player/recorder. As cassettes piled up, I bought a small digital recorder. This was definitely an improvement. During this process, I had the opportunity of travelling with Choon-Ok, her husband, and other members of her martial arts school to South Korea for a World Kuk Sool Won tournament. I was able to visit a few of the places where she had lived during her youth. I also met some of her instructors and family members. These experiences were invaluable when I was creating the narrative of her story.

In our meetings in Choon-Ok’s home, sometimes she would say, “Today, I want to tell you about this experience that happened when I was 18 years old.” The next time, she would remember something that happened earlier in her life.

She would tell me, “How are you going to put all these pieces together so it makes sense?” We would laugh.

“I see. My book is like a human body. Some of my memories are the bones and others are the meat on the bones and the skin,” Choon-Ok said. “The story you will write will put all those pieces together so they form a real person, me.”

“That’s what I am aiming for.”

I would print the transcripts and organize them chronologically on a big table. I tried several outlines and finally we decided for one that combined a chronological story with a few flashbacks. I wrote a narrative following the outline, Choon-Ok would review it, and we would discuss what we thought worked and what didn’t. We revised many times.
Was something left out? Sometimes Choon-Ok wasn’t sure how some events had really happened. If they were not important, for example, to move the story forward, we decided to leave them out. If they were important, but we could not confirm the order of events with other people, then we decided to go with how Choon-Ok best remembered them, and we stated that in the book. In other instances, events involved a third person who did not want, for personal reasons to be mentioned, so we left those out.

Martial arts, generally speaking, is at times regarded as too niche to find a broad audience in cinema. However, Iron is not only an accessible book, but one that contains a universality bridging cultures and nonfiction readerships. As such, we saw the cinematic promise right away. Did you consider its potential for film from day one? Or was it an afterthought? Did you have any concerns that the material wouldn’t resonate?

COH: I did think it would be an interesting movie from the beginning, and after the book was published, many readers responded supporting that idea. Not necessarily a nonfiction martial arts movie, but a movie that includes culture clashes, humor, love, and the martial arts all rolled into one story. If the material is presented correctly, I think it could be a very popular movie appealing to a wide audience, not just to an audience interested in martial arts.

AMR: As the story unfolded in front of my eyes, I realized that The Iron Butterfly is much more than a story about a martial artist. It’s a powerful human story that has many of the ingredients you see in movies people remember: a compelling and motivational story, strong characters, captivating setting, action, drama, intrigue, and humor. And on top of it, it’s a true story!

And in terms of publication: what are the pros and cons of self-publishing vs. going with a traditional publisher?

AMR: I had proposed to approach traditional publishers first. That’s the type of publishing I had experience with. If we did not find a traditional publisher interested in the book in a reasonable amount of time, then we could self-publish it. After a few months of submitting to a number of publishers, Pelican offered a contract, and we decided to accept it.

If you asked a million people, 90% of them would probably say “my life could be a book.” Perhaps they all could. But Ana, as someone with years of journalism and non-fiction writing experience, what are the facets that make a truly worthwhile memoir? Is it a story that hasn’t been told before? The richness of the person or persons documented? The timing and demand of the marketplace?

COH: I think that the timing and demand of the marketplace are at a point where this would be a well-received movie from the general public’s point of view. It’s unique and true, plus Hollywood is remaking many film now as if they don’t have enough good material to make a fresh new movie.

AMR: When the Harmons asked me if I would be interested in writing Choon-Ok’s story, I had no idea what she was about to tell me, but decided to listen. Her story moved me. It was so much different than mine or that of anybody else I knew or had read about. Here was this humble woman who had decided at a young age what she did not want out of life and had embraced instead an untraditional journey plagued with personal challenges that demanded strenuous physical training. A woman who managed to balance career and family by overcoming the obstacles other women before her in this path could not. A woman who moved on through intrigues against her with her head held high and who accepted culture clashes with humor. A woman who is the highest ranking female in Kuk Sool Won. The Iron Butterfly has all a writer can hope to find in a true life story: a story that has never been told before and that inspires readers and viewers to place their own lives in perspective and reach for their dreams with perseverance, grace, and humor. 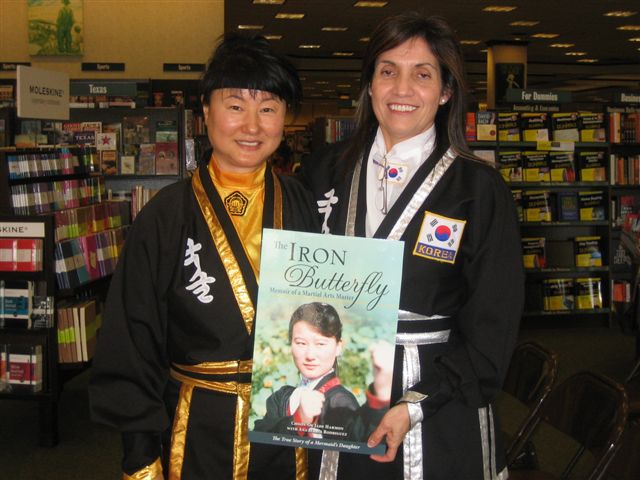 Choon-Ok Jade Harmon is a professional martial arts teacher and the only woman to hold the highest rank in the Korean martial art of Kuk Sool Won. The Iron Butterfly is her true story. She lives in Houston, Texas.

Ana María S. Rodríguez has 26 books to her credit. With a doctorate degree in science, she began her career as a scientist and later became a writer focusing on biographies, science, and history. Her first biography, Edward Jenner Conqueror of Smallpox, received “highly recommended, lively, colorful, and creative” praise (Science Books & Films). The Iron Butterfly has readers “glued from the first page” (Book Bargains and Previews). Her 2018 book series, Animal Secrets Revealed!, is “highly engaging and stands out for its lively exploration of contemporary scientists and their discoveries” (School Library Journal). She is now working on a true medical adventure seeking to save the world. Her work has received two School Librarians International Awards in Science Books and three Science Books & Films Best Book List Awards. Rodríguez lives in Houston, Texas.